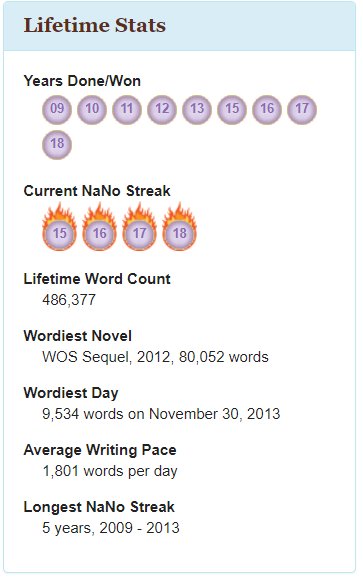 April is one of the months where a spin-off from National Novel Writing Month holds it’s virtual “camp.”

Camp NaNo is a 30-day challenge where you set your own goal for ‘winning.’ In contrast to the original November challenge requires 50,000 words of ‘new’ writing across November.

I discovered NaNoWriMo in 2009.

I was in my second year of university, and decided I needed to try out this ‘i want to write’ drive, with the support of a community and sense of grand movement.

It became a tradition for me, until 2014, when I didn’t even attempt the challenge. I was struggling to manage my responsibilties as things were. I felt adding a 50,000 word goal on top would be too much, and the idea of losing felt too depressing. Then, in 2015, I got back on the wagon and completed it again.

In 2016, my anxiety and depression completely took over my life.

I was studying cognitive therapy and my work let me take 2 hours out in November to practise a particular technique called Behavioural Activation: which I chose to use the NaNoWriMo write-ins for.

I left early to go to 2 write-in meet-ups across the month, aiming to meet the need of pushing my comfort zone to go out to a new public place, to have a ‘social’ connection, to have a sense of achievement having tried it, and also with any writing or plotting I got done there.

I completed NaNoWriMo 2016 with 50,000 words under my belt, and the beginning of a friendship that became valuable.

After that, I pushed my Comfort Zone.

I talk a lot about baby steps, so by November 2017, I was stable and improving, ready to push my comfort a tad more. I aimed for 1 more write-in than in 2016.

In November 2018, I attended at least one a week, and helped the Municipal Liaison to set-up for the beginning party on November 1st. Baby steps may feel like they take forever, but they DO LAST.

So, NaNo for me, is a Mental Health tool.

Not just in the catharsis which comes from writing, the headspace created through a fictional world, the camaraderie of doing something challenging with others, or in the sense of achievement from completing that task with those people… But as a tool to remind me that I am capable. A tool to remember how small sprints can make 50,000 words. Another reminder of my ability to break big things down, and then overcome or complete them by the end of the process.

What non-traditional tools support your wellbeing?