My Works in Progress 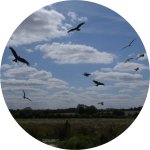 I write fantasy novels specialising in winged creatures (dragons, birds, butterflies) and myths. Here are a few of my current works-in-progress, and some information about the novels mentioned on the blog.

Genre: Standalone Urban Fantasy/Sci-Fi
Tags: Aviculture, Necromancy, Post-apocalyptic, Palaeontology.
Story: When her community are forced to the surface; a necromancer must use her powers to save her best friend, before her mind unravels.

Genre: Young/New Adult Heroic Fantasy
Tags: Aviculture, Falconry, Religion.
Story: Before the spirit charmer can take her place in the clan, snowfall and storms mark the dying of her land. When her clan is attacked, the atheist charmer must choose between faking belief in a new religion or reviving belief in the gods of her people.

Genre: New Adult Fantasy
Tags: Falconry, Necromancy, Romance.
Story: The Planes Series follows the story of a princess who becomes a falconer in order to save her childhood city and bring the worlds of sorcery and necromancy into balance.

To find out a bit more about the process, check out the Work in Progress Journal.

Genre: Standalone New Adult Fantasy
Tags: Dragons, Greek, Mythology, Post-Apocalyptic.
Story: In Greek myth, the Pleiades were Artemis’ nymphs; seven sisters. When magic returns to the Earth, their fates are reborn in humans across Europe. As the women travel across a post-apocalyptic Britain, they seek out answers to their quest, and find a mythical island which crosses the boundaries between magic and mortality.

Click here to see some excerpts of this work.

I’m a fairly active member of the National Novel Writing Month forums all year round — my username is easdannsair. Here’s a brief list of the working titles of each story I worked on, and a note of which number novel it is from those I’ve started.