In November 2016, I became involved in the local NaNoWriMo community. I attended local write-ins, and joined a Discord server to chat with others in my timezone/area about how they were progressing.

There were 3-4 specific people who seemed to be on around the same time as me: our work schedules seemed about the same, and so we ran sprints together.

The Introduction of a Cactus

There is a meme about a cactus: it’s not particularly flashy or new. It simply states: 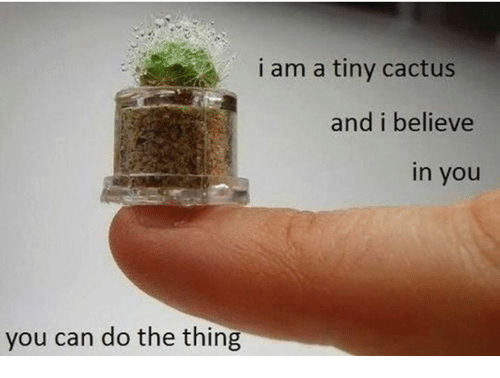 But I hadn’t really need aware of it, until that NaNoWriMo.

The Cactus became our personal macot: with any “I don’t think I will complete this story” or “I’m so behind in my wordcount” being met with a tiny little emoticon of a cactus. Even facebook statuses were replied to with just a pure cactus image.

And so, the symbol was born.

I had not thought about that little cactus for 11 months.

But on November 1st, someone spoke on the server about not knowing if they should start, in case they failed.

And the cactus re-appeared. A tiny, little show of solidarity, and a reminder that we’re all doing this together. And that it’s possible: you can do the thing.

I sometimes wonder if I could bring that symbol into the rest of the year. I’m only 1,100 words from my end-goal, and I’ve really let myself settle into just… knowing that I’ll make that goal at this rate. I haven’t written a single word of fiction since November 29th, and I’m enjoying the break.

From January 1st to November 29th, I only had SEVEN days where I did not write any fiction.
I worked on my novels and short stories on 326/333. Even adding in the 17 days since then, I’m feeling quite happy. This wasn’t a great year for my writing, but even when life took over, I stuck to my commitment.

I couldn’t exactly let down the tiny cactus now, could I?