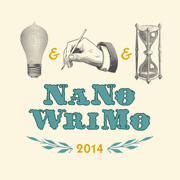 I don’t understand why people say that; November stays still, doesn’t it?

I’ve completed this challenge five times. Sometimes I used the “allowed cheats” like naming characters “Lady Diana of the Green people” and used the full title a lot, and sometimes I surpassed the goal without cheats.  In 2012, I wrote 80,000 words in by 28th November; no cheats needed. I’ve not managed to live up to that experience again.

This was the process that introduced me to writing novels, and over the last few years I’ve been tweaking my understanding of writing, each year returning to the challenge. Outside of November, I’ve started five novels (and finished two of them so far); learning how my process needs to work. During 2014, I’ve particularly focused on having a #WriteChain goal, where the aim is to commit to a daily writing practise.

However, something I discovered from previous NaNo attempts was that I need days off from my story. And completing 90 days and then another 100 days of daily writing has strengthened the lesson that daily writing isn’t for me. It’s just a tad too rigid for me at the moment. However, the aspect that does work, is having an end-goal.

Over the years, I’ve found that writing around 200-500 a day is enough to force me over a block, but not too much that I run out of things to write before my head can plan the next paths. Over 1,000 words a day runs me down too much, and has only been manageable when I was unemployed and had ten hours to myself each day.

Realistically, I would need a monthly writing goal, and be free to divide that however I wished. And so, to the main point of this post.

I’m not going to take part in NaNoWriMo this year.

It’s taken a lot of thought, and a lot of convincing myself that I care more about my novels than my habits and fear of failing. So I’ve decided to take the lessons, to smile at memories and to just hang around with those who are participating. I’ll still chat on the forum and if I happen to write 50,000 words in time, I think I’d still put the info up and “claim the win” but I’m not going set myself up to fail it.

Similarly, I’m putting to rest my WriteChain challenge. It’s been helpful at times, but mostly it’s become a stressor. And I don’t need to force arbitrary numbers upon my writing. When I hadn’t finished a story, it felt important to have milestones and to push myself to finish. I’ve tried to change the goal, but it’s not something that’s working in my writing world right now, so I’m putting it down.

These days, I’ve completed manuscripts outside of NaNo and the WriteChain goal has sometimes led to me writing rubbish just to meet the day’s goal, despite writing well over target the day before. However, I recommend trying it for a few months, because everyone’s different; and I might come back to it in the future.

For now though, I’m sticking to my goal of 150,000 words written this year, and letting myself be flexible how I meet that goal.

What goals help you write?