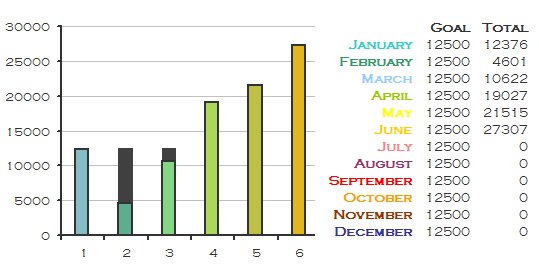 Six months passed.
June was so busy that July seemed to begin with a whimper.

At the beginning of the year I set myself four goals: track my daily wordcount, write a minimum of once a week, “sort out” Resilience, and submit my manuscript to someone by July 1st.

Summer has arrived, and thus it’s time to see how the month went.

I wrote every day this month – bringing my current #writechain to 90 days. However, I did have to tweak it slightly. After finishing the re-write, my need to write dwindled, and thus my memory to reach my daily goal slid. On one day, it had gone midnight before I remembered. However, I then met the goal before going to sleep, so I’m still ‘counting’ that.

I was planning to hit 100 days for the sake of it, but I’m not. I’m switching the goal as of July 1st to do some form of editing or plotting for at least 30 minutes a day – some form of immersion in story and writing. I might even try to aim for at least 100 words edited/written in my plotting file.

What I haven’t always managed, is to post twice a week here, with meaningful content. I know that one bad post could stop a new reader from finding my better ones, and I’m looking at options to perhaps theme one of the weekly posts on that week’s writing project. Not quite sure just yet though.

The last three charts have begun to “empty again” as I passed the goal of 12500 words, thus look incomplete, but they’ve actually burst open and begun to measure the additional wordcount backwards. My most common high-level writing days are Friday – Monday, and across the 6 months, I’ve written 95,448 words. Resilience likely won’t be altered again until October time; once I’m querying with PS, but that’s okay. I’m writing and as long as finishing my started novels is somewhere on my list for the year, that’s what matters.

Note: Having completed the Planes Shifter re-write, I’ve now got 5 completed manuscripts to 4 in-progress ones, whcih feels good. Once I begin the actual writing of TFG though, it’ll tip back up to 5:5. Chuck Wendig mentioned keeping track of this number/ratio (called a Finishing Average) in his Confessions of a Freelance Penmonkey book.

iv. Work Towards Submission by  October

I completed the draft by July 1st. Thus, I’m aiming to get it to beta readers in August and submit in early-October. Also, I am planning to submit a short story in July; which shall be at least a toe in the waters.

Not strictly a writing goal, but with my annual attempt to rekindle my label of “avid-reader” I’m trying to set an achievable goal of one book a fortnight.

Since I began this month behind schedule, reading three books left me not wanting to read for a bit, and thus I’m still short one book. Once I hit 12, I’ll be posting the reviews.

* Day-Job / Other Half changes hit bottom in terms of confusion and overwhelm. I’m still trying to work out where I am, but there are some options still available.

* Sekrit Project attempt one million continued. Backup plans are slowly failing… Really determined not to give up though. One ‘backup plan’ seems to be working, and I think I’m reaching a point where I need to just get on with that option.

* However, accepting that plan [awaiting written confirmation though…] means I have been planning  a major life event – down to colour-coded calendars, lists, tables and a lot of internet comparisons. Oh, and a bit of house-hunting, for… you know… fun.

* I attended a friend’s launch party at a cat cafe. The cats were darn awesome. As is her book (review to follow).

* I began wearing glasses. Not happy about it, but I’m sure it’ll become natural in time. Currently at the *walking into doorframes* part…

* My mum came down to stay — we went up to London for a tour of the viking exhibition with a writer I met during WFC13, and then we spent a day celebrating the summer solstice.

* At the summer solstice event, I met Candia Ridley; lead singer of Inkubus Sukkubus. My 13-year-old self had a fan-girl squee.

* I completed the re-write of Planes Shifter. Huz-Zah.

* I got back into beta reading, which feels good after a while away.

How has your month been?