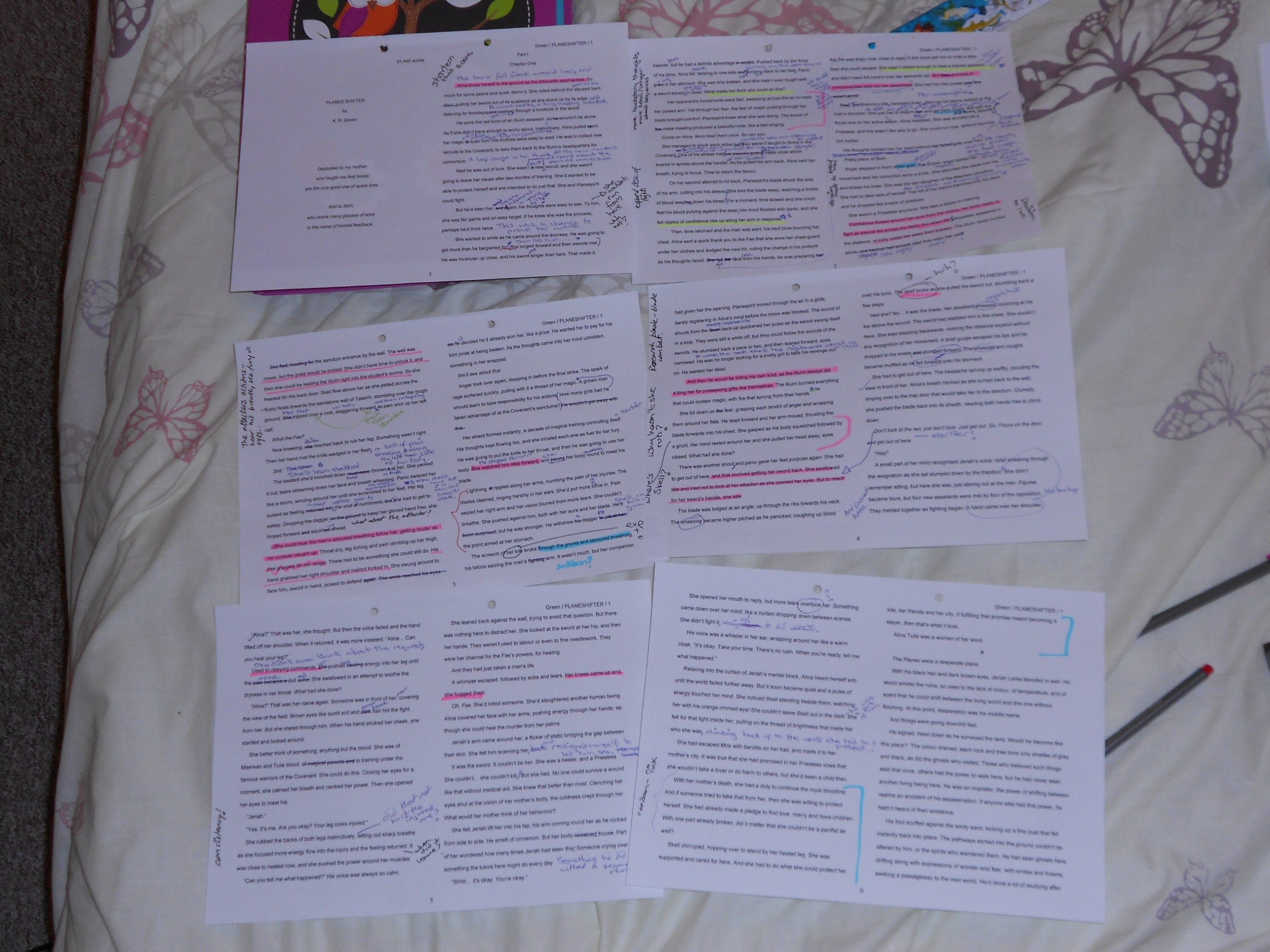 At the beginning of the year I set myself four goals: track my daily wordcount, write a minimum of once a week, “sort out Resilience” and “submit my manuscript to someone by July 1st.”

So, January is over, and it’s time to look at how the month looked.

I wrote daily for the first 11 days, took a week off, then wrote for a further 5 days.

I’ve spent the last week editing Planes Shifter on paper – which means I did write something, but haven’t counted it as i’ll need to type it up later anyway; thus it will count in next month’s words.  So across 16 days, I wrote 12,400 words.

This was less successful, but it’s a new goal; so it’s in progress. I didn’t go more than 6 days without writing in a WIP until January 28th; and I began writing by hand on Planes Shifter on  Saturday 25th, so I’m actually going to tick this off as “win”, although my official stats means it’s not entirely true.

This was a less-well defined goal, but I’ve essentially managed to plot out the main events of the first half of the book, and add 9,000 words of prose to what was already there – re-writing, cutting and writing new scenes entirely. I’ve simplified it to three points of view from five, removed the confusing beginning and focused on character development. I don’t feel that I’ve worked miracles, but it’s a step in the right direction.

iv. Work Towards Submission in July

I began editing Planes Shifter by hand on Saturday 25th January. I’ve commented on the first four chapters; around 21,000 words. I’m aiming to finish this read-through by the end of February, when I can begin typing up my changes. This should be the last major revision, although we’ll see how that goes.

Not strictly a writing goal, but my annual attempt to rekindle my label of “avid-reader” I’m trying to set an achievable goal of two books a month.

* Today I should be getting my Yule present from my parents – a custom-made (because my parents won’t buy what can be made from wood in the garage) desk. I’m ever-so-slightly excited. And a tad concerned it will fall down…

* I’ve had to re-think the future with my other half due to a plan going awry, with very few choices for a back-up. This has led to evenings not writing as I prioritised other things. This is likely to continue into February and maybe even March. I should stress that we are fine; it’s the career and life plans of our next few years that have taken a massive side-step.

* As of this weekend, my day-job is set in a whole new team, where no one seems to know what we’ll be doing. Slightly stressful, but also quite exciting, as we get to shape a new service.

* I was awarded third place in A J Dalton’s mini-saga competition despite entering on the final day!

* I stayed up late to watch/take part in this wonderful write-a-thon with Brandon Sanderson. I learnt more about my own process than I expected to.

* I began watching a television series [which I don’t tend to do]. It’s called The Musketeers, and although it took me two episodes to decide if I like it, I think I’m going to give it a go.

* I attended my local writing group for the first time in a few months. I’m likely going to miss the next one because it clashes with a big event; but we’ll see.

How has your January been?