For 2018, my goal is to review each book I read. I’d love to hit my usual minimum of 12, but having failed that last year, I just want to get back to reading regularly again. 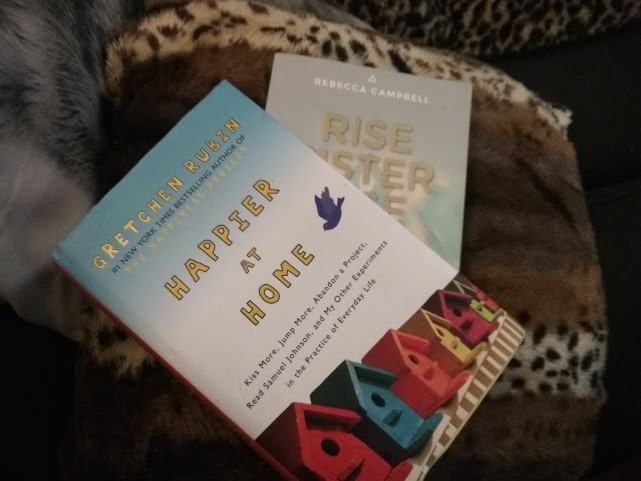 I’m a quarter of the way though my goal, so here are the first three books I’ve read in 2018. I’m not an expert reviewer by any means, but I’ve begun to make an effort to at least give some feedback on the book to help others decide if a book is for them.

As a sequel to The Happiness Project, this was exactly what I expected. I love the mixture of ‘real-life attempts’ and ‘research’ from science or historical philosophy.

Although this book felt a little sparser (it did cover fewer months than the first), and relied on the reader at least vaguely knowing some aspects of the first book, there were enough ideas to help me think about my own happiness, and actually, I realised how many of the things I’ve automatically done in my home.

As a study of other people and some new perspectives, it was a light read. Technically, a few more aspects could have been discussed, but this wasn’t a self-help book with workbooks; it’s one human being’s experience.

I’m aware that a lot of people disliked this book due to the author openly talking about some aspects while avoiding mention of others.

Personally, I was interested to see another human’s perspective on the research and how they implement change. It doesn’t bother me that Gretchen isn’t a starving artist or that her experiences aren’t identical to mine; although I did drop a star as I felt in some places she could have shared a little more of the actions for create a happier home- A couple of her suggestions only have one paragraph detailing the practical attempt and outcome after all the research is summarised.

I used to read a lot of spiritual books, and this year has led me to reconsider my experience of connection, pain and our ‘separateness.’ After about seven months of being recommended Rebecca’s books by multiple people, I gave in. and read the first 3 ‘parts’ in 3 days. Then I took some time to reflect, to pause, and struggled to read a few sections. But I reached the end, and I can certainly say it’s been a while since I took so many notes. I took photographs of pages with their number to return to after, an write snippets on an envelope I used as a bookmark.

For someone new to this kind of book, it could feel a bit disjointed, and the exercises tend to focus more on a reflective questioning approach than practical tools. However, for where I am right now, that was what got me thinking.

There were a few bits where the terminology blocked me a little (I don’t resonate with some of the religious phrasings), however there was so much around it holding me in that I felt able to pause a little and come back to re-engage with the message beneath the words.

I definitely haven’t processed all the thoughts and ‘arisings’ from this book yet, and I’m definitely more used to a more hands-on practical book than this. However, I could equally say I feel I’ve tried the practical side for so long that a bit of the mystic won’t hurt.

After the deep, thought-provoking book of Rise Sister Rise, I turned to some light fiction…

I have read each book of this trilogy in two days. However, I also took a couple of years between each book to recover. And when I say that, I genuinely mean it. I read The Hunger Games in February 2014, Catching Fire in January 2016 and now March 2018 for Mockingjay.

They story is riveting; fast-paced yet easy to follow. The events make sense (sometimes more in hindsight, but always eventually) and the way it’s written definitely gives me as a writer a lot of food for thought about the style of plotting, characterisation and pacing.

Although the book clearly has some underlying messages for our current culture, the story itself is vivid and shows many of the complexities of human beings in turmoil.

Without spoilers, I love the tie-in of previous characters having more of a role to play in this book, and it helped me to feel closure by the end of this book, knowing there was still someone watching over.

What has been your favourite book so far? Any recommendations?