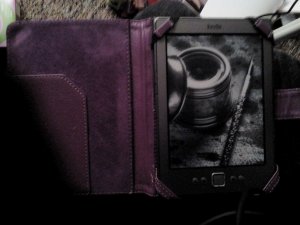 With December completed, and the year at an end, here’s the final book review for my 2014 challenge.

I only read 23 books, so this review is one shorter than planned. Nonetheless, here goes.

I remember seeing the gorgeous covers for this series around the net months ago, but it was a recommendation at FantasyCon14 which reminded me I’d always planned to read it.

Between Two Thorns is a unique take on the realm of urban fantasy, using mirror aspects of well-known cities to create the Nether realm. We are introduced to the three worlds by two story-lines: one of a man desperate to solve a mystery which spans the mundane and magical worlds; and that of a Nether-girl living in the mundane world, until her family drag her back home against her wishes.

The mix of mundane and magical characters continually inject humour to this story, particularly when conversing together, with each voice unique to its owner. The characters were well-rounded, with clear back-stories and differing motives.

Through them, we are introduced to three worlds: that of our mundane cities; the realm of the Fae, and the Nether between. Having read other books where faeries are ruthless, shallow people rather than pretty, sparkly creatures; the setting and characters of the Fae world felt natural to explore, adding another layer of setting to this UF world. Emma has done a fantastic job making the worlds odd and magical, yet also believable as they are somewhat familiar.

The book had a fast pace which kept me reading, and the characters continued to draw me through the story with more compelling mysteries. However, I sometimes struggled to get into the head of a new point-of-view character during switches, some aspects felt a little stilted/unrealistic (Cathy’s relationship with Josh, for example, is very quick to change) and I feel the book ended a little abruptly, although the main plot point was resolved and I recognise this is a series, not a standalone.

I look forward to reading the sequel, and overall, rate this book between four and five stars.

November :: The Adventures of the Princess and Mr Whiffle: The Thing Beneath the Bed – Patrick Rothfuss

I really can’t say much without spoiling the story, but I saw a video of Patrick read this book, then read it again, pointing out how he didn’t ‘twist’ the ending, and sharing his method for creating such an interesting book.

It’s NSFC, and even within the simple structure, there is so much more to it than the main plot line. As a tool in his talk, it really illustrated an interesting concept of writing.

It’s tricky to ‘rate’ but I’m giving it five stars because I wanted there to be more of it and I want to read the sequel.

A short, fun read for anyone writing on a daily basis (or any basis, really), with reminders of things I think most writers know but don’t always remember when drafting a story. This isn’t full of in-depth advice and techniques, but does cover the key aspects of writing through thought-provoking ‘days’. The book is full of his usual snark, clear-cut kick in the pants encouragement and some humour-filled reminders of techniques or useful things to consider when writing a story.

My one criticism would be that some of the chapters are only a sentence or two long. If reading one page per day, I would have found these chapters frustrating. However, since it is a small book, it can easily be read in one or two sittings.

My mum picked up this book when O.H. and I first moved in together, although she hadn’t read it. It’s a lovely little book that just distills how love is about enjoying the differences as well as sharing opinions and activities.

It feels hard to rate it, so I’ll just give it 5 for being a lovely little love story.

I was put off by the title if this book, but I owned it from a book bundle, and it was a short read with some nice little tips on being productive. The information wasn’t new to me, and as I personally make time to write, it wasn’t perhaps as useful to me as it may be for someone else. As a little e-book for someone who struggles to find time for things, it has some good points.

Kevin made some pretty good points about how much time a novel takes to write well; comparing different authors and how different schedules may still allow for the same number of books to be released, which was really interesting and made me think about my perceptions.

I’d give it 4 stars for being interesting, and it has some information/reminders for those who need to make time for their craft.