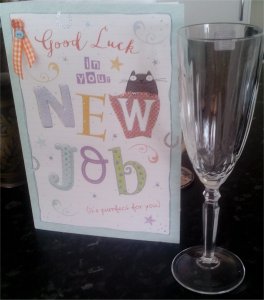 We’re at the half-way mark.

So far this year, I’ve written 31,209 words. I’ve submitted two short stories, had one published and submitted a magazine article.

My mum is recovering well, although her care plan will shift with her needs and we’re awaiting more results. She starts a new treatment soon.

I no longer work for Children’s Services, which is exciting but also a little sad. In the 2.5 years I’ve worked there, I had two leaving parties, four teams, six managers and three different roles. For my last week, I was told to be at the centre for cake, but I also got a card, rose wine and some gorgeous flutes.

And as one door closes, another one opens.

In June, things picked up again. Thank you for sticking with me over the last six months. ‘Normal’ service (weekly posts, normally mid-week) should now resume.

i. Measuring my Words

This month I wrote 4,587 words. I completed and submitted a 3,026 word short story, and then added to ten or so scenes of TFG. I’ve passed all the half-scenes now, so I’m back to writing a scene from just 1-2 sentences of notes. I also submitted a magazine article about writing, which I shall give you details of next month.

ii. Work Towards Submission by …

I’m aiming to have a completed story by September, as per goal iv. Hopefully, I can submit that one around the end of the year. I’m still on track for the year as long as I complete TFG’s first draft by the end of August.

8 / 12 completed. I did read 5 children’s books, but they don’t really count. I’m half-way through the CBT book in preparation for my new job, which I need to finish by the end of July. I began Hero of Ages by Brandon Sanderson, which I’m about 20% into. Hoping to finish both of those in July.

Planes Shifter is still with a beta reader. I’m working on The Felled Gods draft for now. On track as long as I complete TFG by the end of August.

* We played tennis a few times.

* Went for walks across the fields.

* Completed and submitted a short story. That’s my second one of the year.

* We began the process to buy a house. Fingers crossed!

* We visited my parents and in-laws.

* I start my new job — in a field I’ve been trying to get into since I began my university course in 2008. Slightly apprehensive, but mostly squeeing.

How was your month?

What wilderness are you wandering into next month?