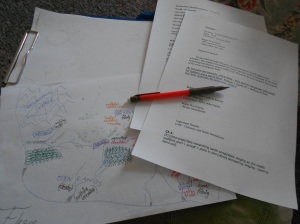 Yesterday I began working on The Felled Gods (TFG), the working title for an idea that has been brewing since April. It’s my experiment in planning, as I’ve made a story bible/binder template in Scrivener and let it brew for months rather than just began it, as usual.

My story binder covers character descriptions with pictures, an index of setting elements (trade/geography/map), notes on culture (magic/religion/politics), a Plot section (scene lists, seven point story structures for each MC, notes from FantasyCon14 I want to use) and a section for the ideas I no longer wish to use — just in case I need them later.

The story follows two characters: an outcasted girl on a mission to find out what’s causing freak weather (and thus affecting crops); and a shapeshifter spy trying to break up a political alliance between two clans.

So far, I’ve completed the prologue and first scene. According to my plans, that leaves 45 more scenes already planned; although I’m expecting the final book to include around 70-90 scenes overall.

I’m also keeping track of the days I work on it, with a note of wordcount and time spent — just as I learned to do with NaNoWriMo.

Mostly, this book is an experiment in all the techniques I’ve wanted to try, melded together. Fingers crossed the result is a well-structured story.

How much planning do you put in before you begin the first draft?