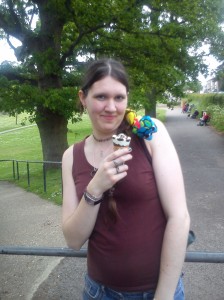 Blimey, when did June arrive?

At the beginning of the year I set myself four goals: track my daily wordcount, write a minimum of once a week, “sort out” Resilience, and submit my manuscript to someone by July 1st.

May has faded like blossoms, and thus it’s time to see how the month went.

I wrote EVERY day again this month – Huzzah!

*awaits round of applause and whooping*

Note: Planes Shifter is a re-write ~ once I had it re-plotted, I pasted over the scenes which i’m keeping from the old version – and that is why the wordcount doesn’t exactly add up.

iv. Work Towards Submission in July

July is looking impossible for Planes Shifter. However, I do have a mini project that might be done by the end of July.

Not strictly a writing goal, but with my annual attempt to rekindle my label of “avid-reader” I’m trying to set an achievable goal of one book a fortnight.

I only read one book this month, which puts me behind. However, I’m close to finishing another and then I can whiz through Shadowbound (I always read them in a day).

* I went to the fun fair with a friend from college. She won me a toy snake. I call it Nagini.

* Day-Job / Other Half changes are still afoot; with some scary deadlines looming (only two weeks to decide my future!!!! Panic!) This is making day-job more stressful than normal, and I have been known to have mild weeping sessions at my desk. This should be all over pretty soon.

* I spent a weekend looking after OH when he had food poisoning.

* I had a picnic with a friend from University.

* I tried microwave cake baking with my mother. Let’s say I’m slowly eating it because you can smell the flour from a meter away (yet with ice cream, they taste pretty okay.)

* I celebrated Beltain with some spiritual friends; which was great because it meant spending two hours out in the fresh air and sun.

* I was offered a sessional paid mental health position with a project I’ve been a volunteer for over the last 4 years.  It’s a few days over the next 6 months, and I’m really looking forward to it.

How has your month been?

2 responses to “May Update: Goals”